Social Media for Engaging Your Students and Growing Your Program

Even students who have never programmed before can quickly and easily learn how to make custom hacking tools in Python. In hands-on projects, students will create tools and hack into test systems, including:

With just a few lines of Python, it's easy to create a keylogger that defeats every commercial antivirus product, from Kaspersky to FireEye.

In the exploit development section, students will take over vulnerable systems with simple Python scripts. Hands-on projects will include:

This is a hands-on workshop. USB thumbdrives will be available with Kali Linux and Windows Server 2008 virtual machines to use.

Prerequisites
Any knowledge attendees should have prior to selecting the track. 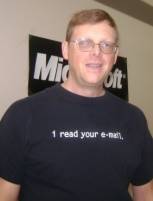 Except where otherwise noted, content on this wiki is licensed under the following license: CC Attribution-Share Alike 4.0 International